I like to think of myself as a very simple person, especially when it comes to throwing parties. I personally have never thrown one. Most of my family and friends would be surprised to know that cooking is one of my favorite things to do. With that being said, I hate cooking for people. I didn’t truly start cooking until right before I met Todd. That poor guy has been through every bad and good meal I have ever made. I think because I got off to a late start in the cooking department, I am really insecure about what others might think, so when there is a family party I bring the beverages or the veggie tray. You can’t go wrong there. The couple of times I have made a dish to pass, I have always gotten good feedback, but it gives me more anxiety than it probably should. That’s why I never intended on ever throwing a party.

Every mother fears things about having their first baby, things along the lines of “am I going to be a good mother?” and “will I make the right choices for my baby?” This sounds crazy but one of my biggest fears about having children was throwing birthday parties. I have watched many members of my family throw parties and I get anxious for them. The weird thing is I would absolutely love to be that person that hosts parties and cooks for people, but I’m just too insecure of a person to do it. I remember my niece Brooke’s first birthday party. I was pregnant with Nash. As I looked around at the beautiful party, I was thinking about how I may have to do this someday. It was held at Hartland high school. There had to have been at least fifty people there and Caroline had rented out the pool for all of us. She had food catered in and goodie bags for each kid. I was so stressed out for her that I could have been sick. I remember looking at Todd and saying, “I hope you don’t expect this kind of party for our baby’s first birthday. We are just having immediate family over for cake and ice cream.” Todd just smiled and nodded in agreement. He has come to know me well and knows I would have an anxiety attack throwing a party of that scale.

That is why I am quite possibly in the most ironic of situations I have ever been in. Not too long after Nash died, when everyone was celebrating his life on the 9th of every month, I knew I wanted to throw a huge party for his first birthday. Not only to thank everyone for getting Todd and I through these extremely painful and miserable six months, but because Nash’s life deserves to be celebrated. I knew I wanted to do something to give back. We would call it ” The Nash Bash!” I called the girls who have been my backbone these last six months for help – Natalie, Christina, Becca, Caroline, and Kasey. What’s strange about these five women is that six years ago, I didn’t know any of them and now they have become some of the most important people in my life. The best thing about these girls is that when it comes to party planning, they are experts in the field! I still remember the group message I sent on Facebook to them. I called it the “Nash Birthday Party Committee.” The message was something along the lines of’, “Dear God help me!!!! I want to throw a party for Nash’s first birthday, a party that I can be proud of. One that children leave screaming that they can’t wait for the next one….but I don’t know where to start! Please for the love of God help me!!!!” It may not have been that dramatic, but that’s how I felt when I wrote it. These five women bring me to tears with their excitement and persistence to help make things as easy on me as possible. They were all so excited to help and honored even that I asked them.

Our plan was to meet at Sagebrush for our first annual Nash Bash meeting! I was nervous. I hadn’t been around a lot of people like that since Nash died. Crowds were scary…but I wasn’t about to have them come to my house and cook for them, even scarier!!!! So I got ready and headed out to meet them. We learned quickly that the loud atmosphere and margaritas were not a good combo for party planning. After that, we picked quieter places such as Panera and Johnny’s Pizzeria. At the first meeting I felt anxious, maybe even a little nauseous. The second was better, and now after several meetings I can even look at babies that are sitting next to our table and smile. These five girls are introducing me to the world again. I know Nash had to have had something to do with it. Since we have started meeting, we have been Nash’d at least half of the times we are out by people paying for our meals. I look forward to these dinner dates. I’m slowly going to family events again and I think that it’s in part to these girls. Our weekly dinner dates are slowly reintroducing me to the world again. They think they are helping me plan a party…oh, it’s so much more to me. They are bringing me back to life. I’m starting to remember things about myself I thought I had lost. There is even a glimmer of happiness and excitement when I’m out with them. One of the mane reasons for this is our main topic of conversation…..Nash.

When it comes to the details of the party, my main thought is that I want it to be a first birthday party. I want anyone who has been touched in any way by Nash to be able to come. When I look around the party, I want to see kids smiling and having the best time of their lives. I want it to be something Nash would enjoy. I also want to have people bring toys like they would for a birthday party, and we will donate them to kids in need. Todd isn’t much for input, but the one thing that is important to him is that guests bring gifts that are wrapped. He wants it to have the feel of a real birthday party. To see people walking in with presents like they would have for Nash’s actual birthday. Each gift will have a card attached to identify if it is for a girl or a boy and what age group. As soon as we made it public that we wanted to throw a party, businesses jumped on board. A photo booth was donated along with pizza, ice cream, cake, and a DJ. We decided there should be booths sponsored by the businesses. They would be the main attraction of the event. Four in all. We picked strawberry shortcake, princesses, superheroes and of course Nash’s favorite, cars! Each booth would have games and prizes. Businesses started reaching out about sponsoring the actual event. On one hand, I wanted that. We are depending on donations to throw the event and I couldn’t and didn’t want to turn anyone away that wanted to help. On the other hand, I was worried it would lose it’s original purpose, to celebrate Nash’s life. I wanted to give back to businesses that had given so much to us, but at the same time I was afraid the marketing may override the actual birthday feel of the party.

Poor Dr. Shumaker, my new boss. I needed advice from someone who is business savvy but also knows my intentions. Dr. Shumaker has been very involved with everything Nash. There were at least three plants from him and his family at Nash’s funeral. He participates in Nash day, and he is even looking into having a bench put in Fenton in Nash’s name. I knew he would be the right person to ask for advice. I told him my concerns about having the party sponsored and not having it sponsored. He gave me a lot of really good advice. Later that night, he asked if I wanted him to sponsor it. I can’t lie, I had thought about it. If there was going to be a business exclusively attached to the party, what better business than the one I work for and one that had been so involved with Nash to begin with? However that was not my intention when I sat down to talk to him. To say I was over the moon when he said he would love to is an understatement. It wasn’t long before I realized he is a lot like the five women I wrote about earlier. His excitement was palpable and before I knew it, he had a magician, balloon animal maker and a bounce house to add to the mix. Not to mention, he had the idea of having people bring baby monitors in lieu of a gift if they wished. We could disperse them to new moms and in home daycares. I was pumped! I was starting to picture this wonderland for kids.

On one of my really rough nights, I thought to myself, “What am I thinking? This will be his first birthday, one of the hardest days of my life. Do I want to be surrounded by children and balloons? Happy people…on my hard day?” I wrote to the girls saying I couldn’t do it. To this point, Todd had been very quiet about the party. When I told him I didn’t think I could do it any longer, he was sad, almost disappointed. He said that we need to celebrate his day. We will get through it together. I know with him, these five women and both our hometowns united for the fist time to celebrate Nash’s life, I will not only make it through it but I will be proud of it. My only worry is no one will show…I have to keep telling myself that no one has let me down yet. Every 9th has been amazing. I know I only made it through these last six months because of the amazing support Todd and I have received from so many strangers, friends, family. Why wouldn’t the most important 9th’s be the best?!?!? It will be the one day all of the Nash nation will be in one room. To celebrate the little boy that not only changed my life but so many others. I have never been so stressed, so excited, so emotionally overwhelmed than I am for January 9th, 2015. I’m lucky though, how many grieving mothers can think about their child’s first birthday, the one they won’t be there for and say, “Bring it on?!?!?” 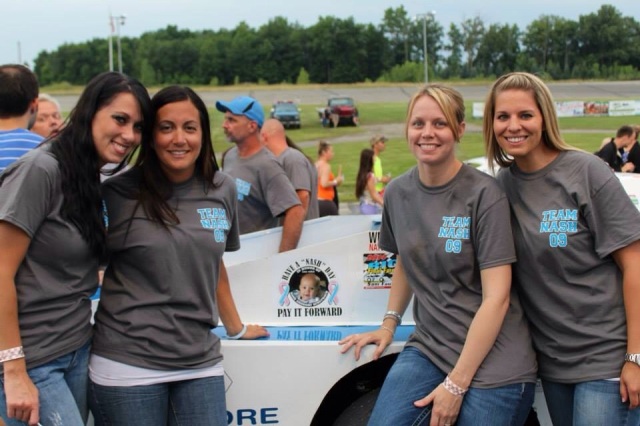 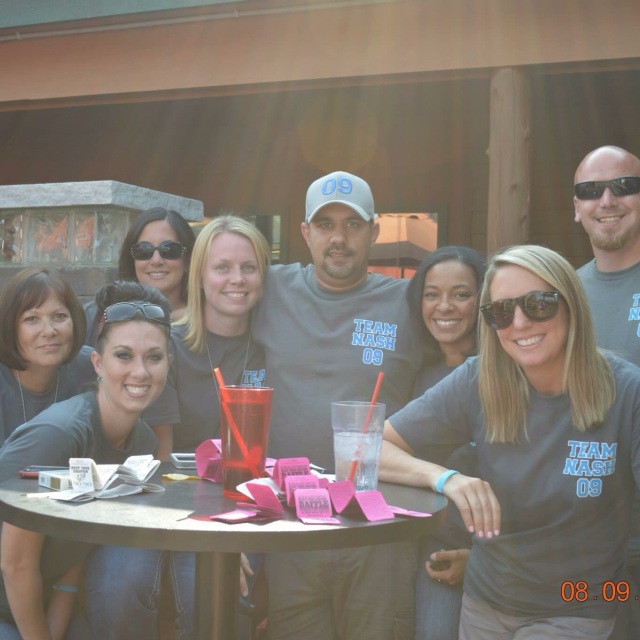 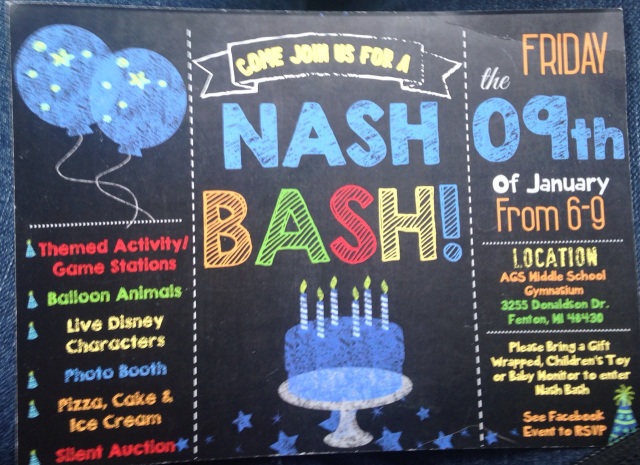 One thought on “Planning a party”