Then next morning, Todd and I and a few family members headed to the funeral home. The funeral home director, Roger, went over the details with us. I was numb for a great deal of this. I was still in a funk believing that this wasn’t really happening. I didn’t want to do it at all. It just made everything too real. We told Roger we were afraid to have an open casket, afraid that he may not look the same. We wanted him cremated. He stopped us and said that before we go any further we should just take a look at him. My heart started racing…half excited, half scared to death. Todd and I went in alone. The room was big. As soon as we walked in you could see a very tiny casket in the front of the room. At this point I couldn’t see him well. I was so scared to see him. I grabbed hold of Todd to hold myself up and started to cry as we walked toward the casket. I couldn’t believe how good he looked, just like a sleeping baby. I reached out to touch him; he was ice cold. The tears started flowing as I bent down to kiss his forehead. He smelled different. I couldn’t stop saying I was sorry to him. Over and over again, “mommy’s so sorry this happened to you.” I put my head on his chest and just cried. There were things I noticed that bothered me. Nash was known for his smile and his big brown eyes. Neither could you see. He always slept with his mouth open. It was strange to see him with his mouth closed.

A different man from the funeral home said that we could hold him. We didn’t want to.  We didn’t want to disturb him when he looked so peaceful. He got a little pushy which was upsetting me. He said, “I’ve never seen a mother regret holding their baby and I think you should”. For some reason, I decided to do it. We walked back to the front and sat on a couch. The man handed Nash to us. You could see where they had cut his head when they did the autopsy. I was surprised it didn’t bother me as much as I think it should have. He placed him in my arms. It felt…good to hold him. I was surprised. Yes he didn’t feel or smell the same, but it still felt nice to hold him in my arms again. They had felt so empty since that day in the hospital. I just started rocking him and talking to him. I handed him to Todd. He didn’t say much. He just held him and looked at him. After a while the man said that he would let our family in but first we had to put him back in the casket. When our family came in and saw him, they all cried. I knew they felt the same way we did. It made it so real, but it was also good to see him. Everyone sat down. My sister looked at me and said, “Can I hold him?” I honestly can’t even remember what I said or if I said anything. I remember thinking that I didn’t mind. I wasn’t quite sure if the funeral home director wanted her to, being that he asked us put him back before our family came in. Before I knew it, she was pulling him out of the casket. Like she had no control of herself and what she was feeling. She had to do it and I knew why. She brought him back to the couch, rocked him and kissed him and wept. I looked at her. I knew she was reliving her own nightmare. You could feel the ache that was still there. On the one hand, I was glad it was helping her…on the other hand, it made me sad to think that even after the four years since Bristol passed, it still affected her so strongly. I knew this is what was ahead for me. Todd’s mom and my mom held him. Becca was still not sure; she was scared. I looked at her and said, “So was I but it does help.” She decided to hold him. You could see she was happy she did. We are all crying but surprised at how natural it felt to hold him. My sister Melissa was there. She had driven in from Texas. She was planning a trip to come up at the end of the month to meet our Nash. This would be the first time she ever held him. My father-in-law and friend Shawn were quiet supporters. Not wanting to take time away from us to hold him. I honestly don’t know if my father-in-law could have done it. Then Todd and I held him again. I did not want to let him go. I felt good if he was in my arms. I remember thinking it would be amazing if I could hold him during the whole service even though I knew that I couldn’t. They put Nash back into a casket so small it makes you have a physical reaction. Then we walked back into the room to talk. Seeing and holding Nash had helped us make our decision. Now I was OK with him being shown at the funeral and Todd wanted him to be cremated after it was done. He wanted to have a ring made to put ashes in; something he could have on him at all times.

We made it through our first big decision. Both happy with our choice. We picked our songs – “Mammas Don’t Let Your Babies Grow Up to Be Cowboys” and “Mirrors”. We also would have “It’s a Wonderful World” played at the end. It was played at Bristol’s memorial. That wasn’t the only idea I stole from my sister’s experience. They had released 51 balloons to represent each day Bristol spent here on earth. I loved it. It made me feel happy when we did it for her. I told Roger that I wanted our guests to release balloons after the funeral. We knew it would be a big funeral and I could see Becca’s and Roger’s wheels turning at how they were going to blow up so many balloons. I learned quickly that when you lose a child, people will agree to anything. They told me that they would figure out a way to make it work. I remember him asking me about flowers. I wanted something with a butterfly on it with the plants. Something to represent Nash’s cousin in heaven. I looked at my sister. I could tell that as hard as this was for her, she was happy that we were including her daughter, my niece, and so was I. We went over what papers to publish the obituary in. The papers we would hand out. The DVD Todd’s cousin Amanda and the rest of his cousins put together. Then he told us to bring any special toys that Nash had. Eventually we left. I was exhausted, but I hated leaving Nash. I know the only thing that got me through his two showings and funeral was knowing I would be in the same room with him during it all. 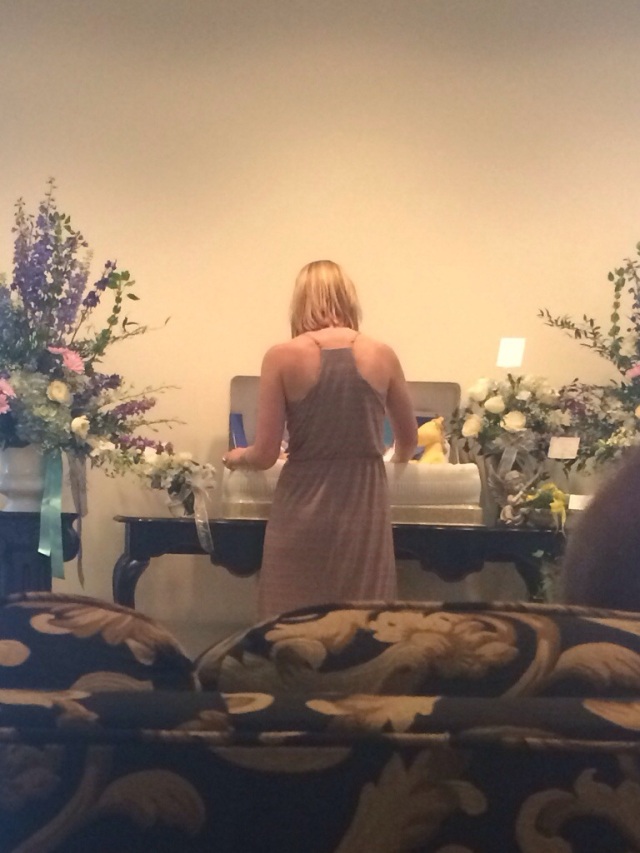 3 thoughts on “Planning a funeral”