Before I share the events of this day, I want to explain why. I know people have questions. People that love us, people that love him. I also have close friends with new babies that are scared. They want to know what happened. Could it have been prevented? Is there something they can do to protect their baby? I will say this. I don’t know if I will be able to answer your questions. In fact, I’m sure this story could possibly scare you more. I do, however, feel that it’s important for people to hear. With that being said, this is an ongoing investigation and I will share only what I can, which is not much. As far as we know, there was no foul play.

Thursday, June 19, 2014 was like any other day. I put Nash in his saucer to play while I made him his bottle. He was playing so hard that he was rocking the whole saucer. I made a mental note to myself that I would need to adjust the height on it when we got home. He was getting too tall for the smallest setting. I sat on the couch and fed him his bottle while he stared up at me like he always did.

I packed his diaper bag and we were off to the sitter. She had been watching Nash for at least a month now. Sometimes I was concerned about the amount of kids she had in her care, but I had Todd and Becca do surprise visits in the middle of the day. No matter how many kids were there, she always had Nash in her arms when they arrived. After all, he was her youngest and she adored him. The day before it happened, I was really concerned. School had just let out for the summer and she had double the amount of kids than usual. Todd and I talked about finishing out the week and possibly finding someone else. In all honesty, I don’t think we would have decided to switch. The sitter had been watching kids for 20 years and you could tell she loved all of them! I took him out of his car seat and smothered him with kisses, like I did every time I dropped him off. When I walked away, the sitter did the same thing she always did. She had him face me while in her arms and she said, “Bye Momma, have a good day.” Nash flashed that smile at me and I was off.

It was around 4:15 p.m. when my coworker Marsi told me that Todd was on the phone and he wanted her o interrupt me. I knew right away something was wrong. He has NEVER called me at work EVER! This is where the pit in my gut started, and to this day remains. I picked up the phone and heard panic that I was not use to hearing in Todd’s voice. He said, “You need to leave now! Nash is not breathing!” I hung up, grabbed my purse and ran to my car. In that short five seconds before I called Todd back I thought….was he having trouble breathing?!? Did he choke?!?! I called back and he said, “The sheriff is doing CPR!” My heart sunk. I have worked in hospitals. I have worked for hospice. I have done CPR. I knew there was a good possibility this was not going to end well. I hung up with Todd for two minutes to call my sister and brother; I wanted them there, I needed them! I called Todd back. He had already called his family. They would beat us there. I went 100 m.p.h. on the highway. I remember a group of teenagers was in a car in the fast lane blocking my way. I whipped around them. They just looked at me laughing. I pulled up in front of the hospital and ran inside.

I ran to the first desk I saw and started to say, “My baby…” I didn’t have to say anything more, the receptionist told me what elevator to take. When I got out of the elevator, I looked up and down the hallway with panic. A nurse saw me and he must have known who I was by the panic in my face. He said, “Go right, straight, and then left.” I managed to say, “Thank you.” Who does that at a time like that? It just came out like my body was on auto pilot.

When I got to the right spot, I saw my husband’s sisters and their husbands in this room…crying; my brother-in-law Chad…crying. I had never seen him do that. Becca grabbed me, shook her head no, started crying and said, “Shelly.” I just started slapping at her, as in don’t say anything horrible. She quickly said, “No, I don’t know.” She walked me down the hall, telling the staff, “This is the mother.” I could tell by the faces of the nurses alone that I was about to see something I would never be ready to see. I walked into a room of what seemed like 30 people. Some praying, some crying. I saw my in laws in the back of the room. I made my way to the middle of the mob. A nurse moved so I could get close. Thats when I saw something that haunts me to this day. My baby, on a bed for an adult. Eyes half-opened and unfocused, blue around his mouth, hands at his sides, lifeless…..a doctor wrenching on his chest doing CPR. My knees buckled, but I kept walking. I put my hand on his head. I said “Nash, Momma is here. Oh, baby.” I looked at the doctor and through tears asked him, ” Are you waiting for me to tell you to stop?” He looked at me with sad eyes and said, “We have been doing this for an hour.” I knew from working in the hospital that they were no longer doing CPR for Nash; they were doing it for me. It only took minutes to tell them to please stop. They tried one last time. Stopped. Look at his heart on the monitor and said, “Still nothing”  before they stopped for the final time. I couldn’t rip the blood pressure cuff and monitors off of him quickly enough. I wanted to hold him. It’s strange the places your mind goes in a moment like that. Becca was mad…she wanted to know what happened. All I thought was that he was clearly gone, but God wouldn’t let his sole leave until his momma was with him. He couldn’t be that cruel. I wanted to do what any mother would do if their child was hurt. I wanted to rock him, kiss him, sing to him, tell him it was OK to go.

The room cleared except for Todd’s family and our friend Dave who worked there. The nurses brought in this old, worn out rocking chair…unlike the beautiful one I had in his nursery. I sat there looking at him; it looked like he was sleeping. Todd came in with some hope still in his eyes. He saw me in the rocking chair with Nash. At first he didn’t know, and then he saw Nash’s arm hanging at his side. He collapsed in my lap. 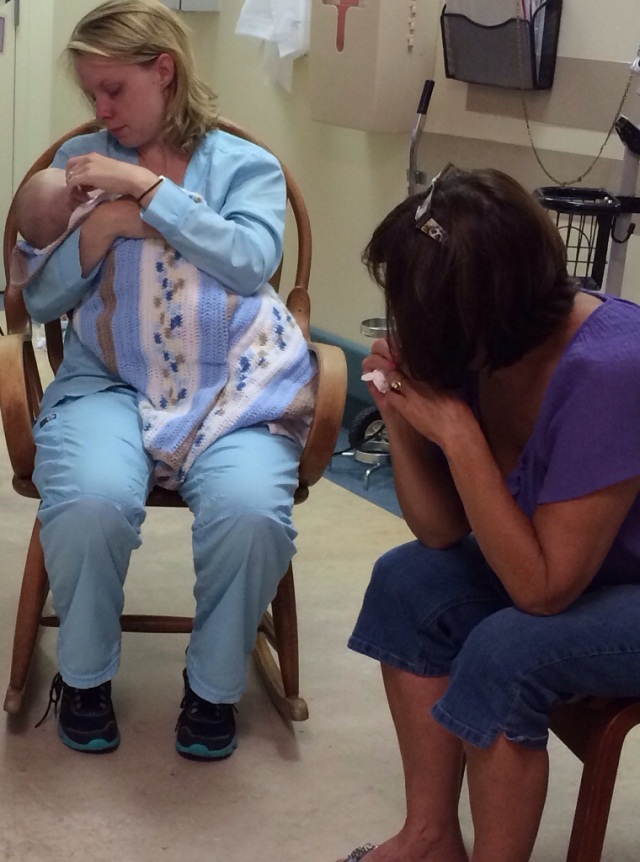 31 thoughts on “The day heaven stole half of my heart…”